Artist of The Week: Q&A With JD Smith 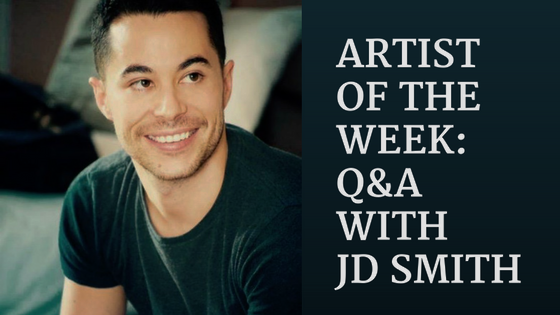 Recently I got in touch with Australian singer-songwriter JD Smith to talk about his upcoming single and album.


Which by the way the single will be released in late November 2016 and album in early 2017. And yes there will be a video clip, coming soon!!!


Such exciting news, as it has been a long wait since his last release ‘Invite Me Places’ in 2012.


He has recorded many solo albums, his latest being ‘Invite Me Places’ which he toured extensively around Australia promoting.


You can purchase the physical copy of “Invite Me Places” now on Amazon: https://www.amazon.com/Invite-Me-Places-James-Smith/dp/B0084I8JQ2


Here is a Show reel of the artist’s past performances.

Though the new album is a lot different from past releases, you can’t go wrong in purchasing top quality music, and that is where JD Smith comes in.


This is JD’s first cover album release and I can’t wait for you all to hear it.


Smith is heading to the U.S. with the TEN Tenors for the ‘Power Of TEN’ tour from November 28th 2016. JD started his amazing adventure with the group since late 2015 where he travelled to the U.S. for the ‘Home for the Holidays’ Christmas tour.


And now the time has come, to finally reveal to you all, on what has been happening in the past year with this talented artist.


James talks about a lot of things, i.e. new single, video and cover album release, the process in making the album and so much more!!!


You will be releasing your new single from your upcoming album in November. Can you tell us what the song is called?

The single will be released late November. Closer to the date a video will be released to promote the single. At this stage, without giving the track away, it’s an old country tune that we’ve slowed right down; it’s both hauntingly beautiful and heartbreaking. It features only piano, pedal steel guitar, bass and vocals. I’m pumped for ya’ll to hear it.


How did it all come about in releasing a cover album?

It’s been a long time coming this record. I always knew I would record some sort of covers album, it was just finding the right time, style, songs, producer and musicians. I’ve been lucky over the years to have worked with some extraordinary musicians, some of which play on this new record.


Cover albums aren’t as easy to put together as some may think, it’s a process of making sure that the material you record makes sense together as a whole, rather than slapping on a few favourite songs or well-known songs, I really needed to think of how I’d make the album gel together. I feel like we got that part right!


What was the process in making the album?

We recorded the album in Sydney at Church street studios in Camperdown. Sean Carey has produced the album (he also produced my 2012 album ‘Invite me places’).


It was a pretty cruisy fun process, the songs took shape within days and the arrangements, most of which I came into the studio with, all made sense as we layered the tracks.


I grew up listening to Country music, it took me a while to really appreciate it, now I realise some of the best singer/songwriters are country artists. It was a no- brainer for me to give this album a country feel.


It’s natural and feels right for me, subsequently, most of the songs on the album aren’t country songs (apart from a couple), but we’ve added a bit of country flavour to them.


There are a couple of well-known songs on the album and some I’ve been singing live for years now like “Bed of Roses” by Bon Jovi, However, I think most people will be pleasantly surprised to hear a range of songs that they may not have heard before. We’ve included songs by some great artists/bands like Van Morrison, The Eagles, Guns‘N’Roses, Bob Marley and The Bee Gees to name a few.

With your new single and album, what should we expect?


I’ve never been so excited and proud of a recording as I have with this new record. My voice seems to be stronger than it’s ever been, recording is second nature to me now, and I feel like this album will show folks a side of me that they haven’t heard before (like a bit of yodelling).


The album itself is definitely not the type you’d put on if you wanted to party the night away. It’s an adult contemporary pop/country album that’s easy listening.


All real instruments with real musicians playing everything, real singing (including backing singing by Shandelle Cooke who has helped give this album so much class, as well as Bec Caruana who added some absolute specialness to 2 of the tracks), there’s nothing fake about it.


If you want an album to sing along to, then this is definitely it! Expect some new music videos, singles and tours in 2017 to coincide with the album’s release.


In the coming months, what should the fans know on what’s to come?


After releasing the first single from the album in November this year, I’ll be heading to the US for a tour till early January with The Ten Tenors. My album will then be released early 2017 with my own Australian tour promoting my album.


And lastly what would you like to say to your new and current fans?


I’m really looking forward to playing live for you all in 2017. I love meeting folks out there who enjoy seeing live music and support live artists. Thanks for any and all your support, I’m super excited to have a new album out for you all to enjoy very soon. It has been a few years since I have released anything, but hopefully the wait will be worth it. So far, it has for me!


What a humble and down to earth guy.


Thank you so much for taking time out of your busy schedule James and look forward for all of the exciting times ahead with the release of the single, video and album and of course the tour!!!


Keep a look out for this superstar, because you don’t come across this kind of talent often. His voice shines so bright like a diamond!!!


Thank you for always stopping by and come back soon for future Artist of the Week series, exclusively at Music Beats Central.


Much love and ciao for now!
Hanan xx