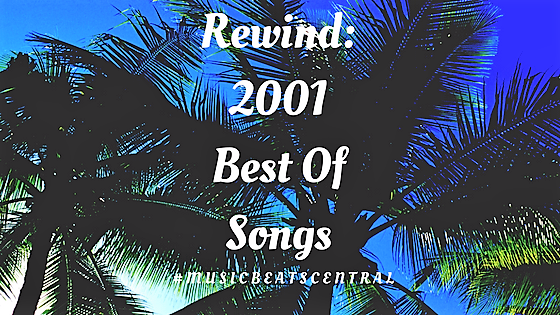 
If you love today’s entry, you can purchase all 8 tracks now on ITunes or listen to my compilation on Spotify.
https://open.spotify.com/user/musicbeatscentralofficial/playlist/0LZnJ8LTQm5CdHkMp6Z9G4


Nelly Furtado – I’m Like A Bird
It was one of the most successful singles of 2001, peaking at number one on the Canadian Singles Chart, as well as number two in Australia and New Zealand, number five in the United Kingdom, and number nine in the United States.
Website: http://www.nellyfurtado.com/
ITunes: https://itunes.apple.com/au/album/whoa-nelly!/id15554717


Lee Ann Womack – I Hope You Dance
"I Hope You Dance" is a mid-tempo country pop ballad in which the narrator, a mother, expresses her wishes to her children.
Website: http://www.leeannwomack.com/
ITunes: https://itunes.apple.com/au/album/i-hope-you-dance/id7468670


3 Doors Down – Kryptonite
The song was written by drummer/vocalist Brad Arnold in a mathematics class when he was fifteen and was one of the first songs he ever wrote.
In terms of the song's meaning Arnold has said:
"That song seems like it's really just kind of like asking a question. Its question is kind of a strange one. It's not just asking, “If I fall down, will you be there for me?” Because it's easy to be there for someone when they're down. But it's not always easy to be there for somebody when they're doing good. And that's the question it's asking. It's like, “If I go crazy, will you still call me Superman?” It's asking, “If I'm down, will you still be there for me?” But at the same time, “If I'm alive and well, will you be there holding my hand?” That's kind of asking, “If I'm doing good, will you be there for me? Will you not be jealous of me?” That's the basic question that song's asking, and maybe throughout the years of singing that song, I might have come up with more meanings for it than it actually might have originally had.”
Website: http://www.3doorsdown.com/
ITunes: https://itunes.apple.com/au/artist/3-doors-down/id101604


P!nk – Get The Party Started
"Get the Party Started" is a song performed by Pink, and was the first single from her second album called Missundaztood (2001). It became an international hit and reached the top ten in many countries. The song was Pink's highest selling at that time. The track was released on October 9, 2001 to positive reviews from critics and after the release of the single it was confirmed that Pink would be releasing Missundaztood.
Website: http://www.pinkspage.com/au
ITunes: https://itunes.apple.com/au/album/m!ssundaztood/id165158938


Daniel Bedingfield – Gotta Get Thru This
“The single went to number one on the UK Singles Chart in both 2001 and 2002, making it one of Bedingfield's most successful singles on the chart. It also peaked at number ten in the United States and received a Grammy Award nomination for Best Dance Recording. The song became Britain's sixteenth biggest selling single of 2001 and has since been certified Platinum.”
Website: http://www.danielbedingfield.com/
ITunes: https://itunes.apple.com/au/album/gotta-get-thru-this/id68033044


Blue – All Rise
“The track was released in May 2001 and peaked at number four in the UK, number three in Australia, number one in New Zealand and number 15 in Ireland. The song has received a Silver certification for sales of over 200,000 copies in the UK.”
Facebook: https://www.facebook.com/officialblue/?fref=ts
ITunes: https://itunes.apple.com/au/album/all-rise/id724451044


Michael Jackson – You Rock My World
“"You Rock My World" was commercially successful, generally charting within the top ten positions on music charts worldwide. The song was Jackson's last hit single in the United States in the final years of his career. "You Rock My World" charted within the top twenty positions on the Billboard Hot 100 on September 15, 2001. The following week, the song charted at its peak position, number ten. It became Jackson's highest charting single since his 1995 number-one single, "You Are Not Alone". "You Rock My World" also charted at number seven and thirteen on Billboard’s Pop Charts and R&B/Hip-Hop Songs respectively.”
Website: http://www.michaeljackson.com/au/
ITunes: https://itunes.apple.com/au/album/number-ones/id273598907


So how are you feeling going back in time?


For me, it took me back when I was in year 11 and was listening to all of these artists on my mp3 player at school or on the bus on my way to school lol.


Ahh those were good ol’ day’s haha!!!
It was when music was still music!!!


If you enjoyed today’s playlist, you can purchase all 8 tracks now on ITunes or listen to my compilation on Spotify.
https://open.spotify.com/user/musicbeatscentralofficial/playlist/0LZnJ8LTQm5CdHkMp6Z9G4


And for all social media links make sure to head to the artists website.
Hope you enjoyed watching and listening as much as I did :)


Have an amazing week and chat to you all soon in my next entry.


Much love and ciao for now!
Hanan xx
Posted by Music Beats Central at 4:17 pm